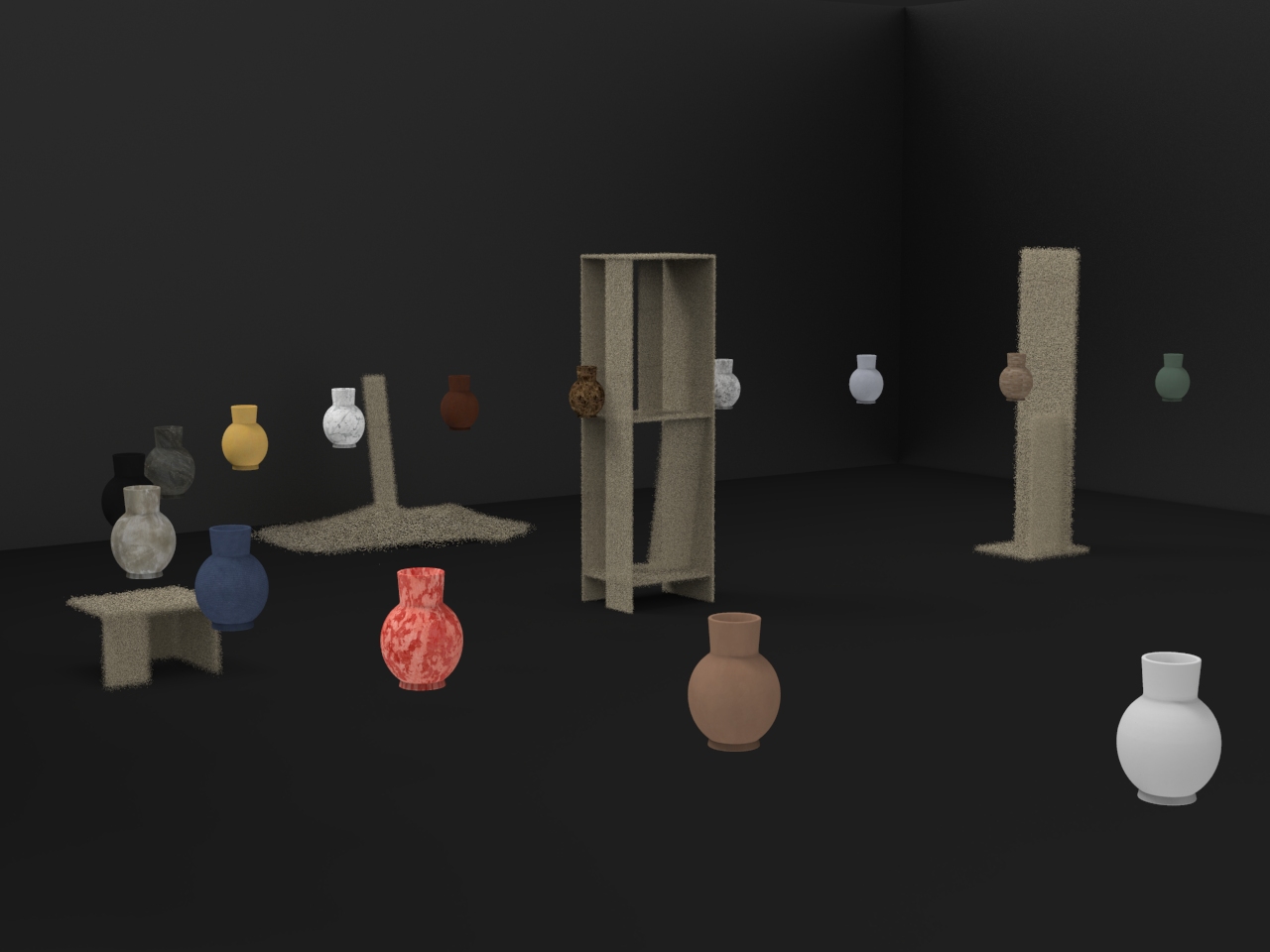 The installation Layered Transparency – Displayed Opacity explores a changing perception due to an increasing penetration of analogous, haptic phenomena with virtual and digital offerings in the design, presentation and interaction of objects. In a total of 4 „stations“, glass and its source material sand explore the relationship between the real and the virtual world. In most cases, it’s the material that forms a bridge and acts as the ultimate boundary between the two.

The object shown in each „station“ is a vase. As a thing from everyday life, its function stands between decoration and purpose. Painted vases serve as three-dimensional images for the preservation of the past. Textures, inscriptions and drawings painted on the surface tell of the story in which the object was once embedded. The vase in this presentation can tell the stories between analogue and digital.

The analogue object in analogue space

The display cabinet is a symbol for the presentation of the analogue object in analogue space: glass panes that overlap, meet and thereby form a three-dimensional space in space—a stage through which the vase is carried and protected. The dark and one-sided mirrored panes reveal the qualities of glass. By shifting and twisting individual panes of glass, illusionistic moments and unexpected angles of vision arise that can be discovered by walking around the display cabinet. It is a game of transparency and reflection that influences the moment of observation.

The analogue object in digital space

Because it detaches the object from its spatial and temporal connection, the digital screen is the modern presentation medium par excellence. It enables us to show the analogue object in digital space. The effect of a fogged window pane is transferred to the screen—the digital window—and alludes to the transparency of the barrier. When you step in front of the screen, you can see the water drops sliding down the glass. You intuitively swipe the glass of the touch screen with your finger and remove the virtual haze. This gives you a glimpse of the image of the vase.

The digital object in digital space

The computer not only presents, but also produces purely digital content—of things that have no origin, no original in the analogue, that originate from a hyper-reality and are virtual in nature.Virtual Reality enables us to enter the digital space. We gain an additional perspective on the analogue scenery surrounding us—a digital layer that covers everything. Physical laws are abolished and give us the possibility to completely redefine staging and presentation. The glass barrier begins to dissolve into its components - in sand, the grain, in pixels. The vase itself shows a spatial and temporal dissolution of boundaries, that was not so visible in the analogue. It can be seen in a variance of shape and texture.

The digital object in analogue space

The vase can digitally be disassembled into all its layers and components. Materiality, as well as size and form, are now variable. It does not have to fulfill any function. By transferring the vase back into the analogue, new functions can be added to the individual layers: in this case the texture becomes the material the vase is made of—sand. 3D printing enables us to build the digital vase out of sand and to bring it back into the analogue space. The roughness depth of the sand surface can be seen as a transition zone that describes the threshold between analogue and digital. The result is an analog-digital sculpture, a collage of body and surface—a hybrid of image and object. The collage opens up an intermediate space in which the vase presents itself in its transformed exterior. Thus qualities from both worlds are
interwoven. The sculpture is placed on a glass pedestal, from which it is carried, but no longer covered.